Walk One: the old Roman Road

This is just to let you know about our walk on Wednesday evening, the 23rd August , from The Ridings (off Old Road) along a possible Roman side road leading from the main Dorchester to Alchester Roman Road to Horspath.  Chris copied and labelled a map (attached) of our route: past Open Magdalen Wood and Open Brasenose Wood with the Westhill Farm site in the distance.  We identified a couple of possible sites that might be interesting to investigate further by excavating.  We entered Horspath along the footpath just below Manor Farm.

The other map shows Chris` thoughts about a possible continuation of this road through the previous grounds of the Manor House, now Wrightson`s Close, (before the Manor House was built) and on to Gidley Way;  across Gidley Way, above the vineyard and the allotments and behind the houses on Cuddesdon Road, across the Hollowbrook and on to Old Horsepath. This is creative thinking but based on remnants of a footpath off Gidley Road leading in this direction. 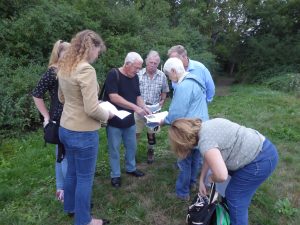 The photo shows Chris pointing out the possibility of there being a Roman Villa near the Westfield Farm site.  Further investigations needed!!!!

We were 8 hearty soles who walked to the village of Old Horsepath this evening.   It didn`t rain, and was a lovely clear evening.  Chris showed us the remaining stones on the Old Horsepath site and we visited the source of the Hollowbrook with the pond in the background.   Chris explained about some of the previous excavations he has carried out which revealed a cobbled stone area, medieval pottery sherds and even some Roman pottery.  We identified a particularly useful place, in the hedgerow, to possibly carry out a small excavation to understand the village site better.  We tried to make sense of the possible route from Lower Horsepath to Old Horsepath across the top of the vineyard, the top of the allotments and along the tops of the gardens on Cuddesdon Road.  We all felt we understood the lay of the land much better.  It is certainly a spot with a great view over Oxford and beyond!!! 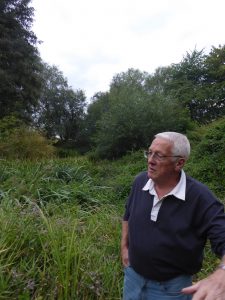 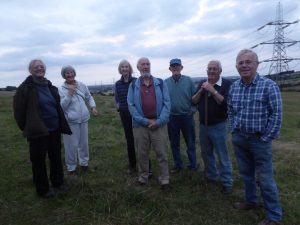 Wednesday was a lovely afternoon for our 3rd walk to the Old Horsepath site.  We started by looking

over the fields towards the likely path between Lower Horsepath and Old Horsepath, above the new vineyard and the top of the allotments and on.  (see map attached)  Jacqueline said she will do a plant species survey next May of that path and also the path from The Ridings to see if there might be evidence of ancient paths from the plants she finds.

We then looked into the field on the top of the hill where a large scattering of stones is evidence of the village of Old Horsepath.   We pulled one dressed stone from under the hedge and another large support stone. (see picture)  Ivan is going to ask a friend if he can identify where these stones could have been quarried.  We think in this hedge could be a good first place to make several test-pits as this soil hasn`t been disturbed for many years.

We then walked to the source of the Hollowbrook.  Chris has strimmed a path through the undergrowth and exposed the stone over the source so we were able to have a good look around.  From there we walked back along the path of the Hollowbrook, past 5 Oaks field looking again at the landscape and imagining the possible path that once connected the 2 Horsepaths.

Our next venture will most likely be to find a date and the people who would like making several test pits near Old Horsepath and then to meet again in the Hub where we can discuss what we have found and any new thoughts.  Chris will write a position paper pulling together the evidence and the possibilities we have found.  Due to previous commitments that Chris and I have over the next weeks we will probably leave all that until the last week in November, but we will be in touch  before that. 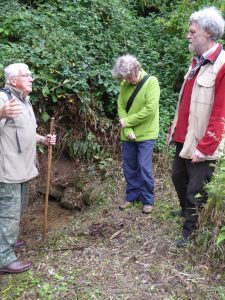 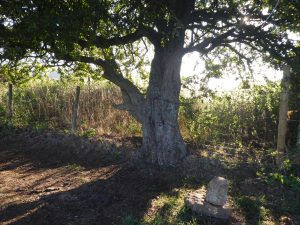 Please ask any questions or make any comments you may have.