St Mary’s stands on a raised hilltop, the site of a Saxon out-look post, whose ancient retaining walls still exist around the western end of the church.  It is a prominent local landmark, facing across the Thames valley to Wittenham clumps and the Iron Age hill fort.  The limestone used for building the church is likely to have come from quarries in the parish.  The earliest reference to a quarry in Garsington is in 1210, in the records of the nuns of Godstow.

Archaeological evidence confirms the existence of a smaller late Saxon or early Norman church on the site.  The oldest part of the church is the Norman tower and part of the walls of the nave which date to the 12C.  The chancel was enlarged in the mid 13C.  Together with the north aisle, built at the same time, it is considered an e 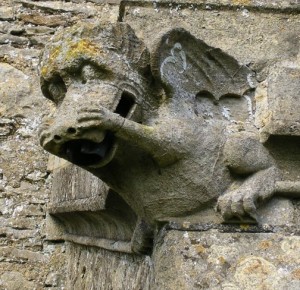 xcellent example of the transition from the Early English to the Decorated style of architecture and the mouldings are uniform throughout.   The east window has deeply cut mouldings and tracery also from this period.  During the 14C the south aisle was added.  It is thought that the piscine (a recess for washing communion vessels) and the east window of the aisle, with its more intricate Decorated tracery, were built later when the east end was fitted out as a chantry chapel, possibly by one of the de la Mare family, who were lords of the North Manor at the time.  The altarstone is the original 1540 altar.  It was removed in 1547 following the final desecration of churches initiated by Henry VIII but discovered beneath the floor of the south aisle in 1848 and returned to its original position.

The first record of a priest at Garsington is c.1160, but Wallingford Priory had probably already received the advowson (the right to present a priest to the living) about a century beforehand, at the time of the foundation.  Wallingford retained the advowson until the dissolution of the monasteries in the 16C.

After the Reformation Thomas Pope procured the advowson for his new foundation of Trinity College at Oxford, and also bought land opposite the present entrance to the churchyard for a rectory, to which the whole college could retreat in times of the plague.  Later the building, or part of it, was either let, or used as the rectory when it was occupied by curates.

Like other parish churches near Oxford, the church building suffered damage and neglect during the Civil War and Commonwealth period, when the neighbouring village of Wheatley was a Roundhead stronghold, and General Fairfax’s Royalist troops were probably quartered in the church.  Evidence of many of the alterations and repairs of 1668 disappeared during the Victorian restoration.

For a history of the Rectors of Trinity see Trinity page.

In 1848 plans were prepared for the complete restoration of the church.  The curate, Rev’d W. J. Copeland, undertook to raise the money by asking for contributions from local landowners and others.  Separately £100 was raised through the rates to repair the tower and to re-hang the bells.  During the renovations, which cost £1074, the west gallery was demolished and the 15C carved wooden rood screen was removed and altered to provide a screen across the tower arch, which had formerly been obscured by the gallery.  a woodcut of the church pre 1848 shows that the church as seen today is essentially as it was in 1850.

The tower and roofs were extensively restored in 2007 at a cost of £275,000 with the aid of grant money from English Heritage and substantial local fund raising by residents of the village and other charities.  A legacy from Edna Wheeler in 2011 enabled the restoration of stonework, refitting the bells, removing the font to the north aisle and installation of a server.

This Fabric report is guided by the principles of the Mission Action Plan adopted by the PCC in January 2016, in which we see as one of our three key priorities for the next five years:
 to develop the use of the church space
and we see as one of our five goals:
 to continue developing the use of the church space by applying for a faculty to replace seating, and to review the church facilities project
Among the recommendations of the Everybody Welcome course followed by the PCC are:
 to make the church space more flexible and open
 to approach the architect and Diocesan Advisory Committee (DAC) to complete the tower refurbishment and to draw up plans that can be used to apply for grants
 to review notice boards and the positioning and display of literature
 to improve accessibility, and thened for parking, wheel chair use, condition of th path, and loop system and microphones
Work carried out and planned

The church pews
We have bought from the Barn Centre at Thame some padded metal seats to replace the former plastic additional seating. We have received from Robert Montgomery (the church architect) an assessment of the condition of the church pews, in which he clearly recommends which pews should be repaired, treated, removed, or retained. The full documentation, including a statement of need, has been sent to the Archdeacon and the DAC, and we have received an Archdeacon’s licence to treat the recommended pews (having also received professional advice on how to treat the pews ourselves), but not to remove any pews as yet. We will be carrying out the woodworm treatment in April.

We have agreed that an overall approach needs to be taken to further re-ordering, to include improving storage, following further consultation with Robert Montgomery.

Signage
The ‘Everybody Welcome’ exercise was very helpful in identifying a number of ways to improve the signage of the church. This includes both external and internal signs. The main external sign near to the road is in poor condition and difficult to read, and we plan to replace the present poorly-positioned sign at the entrance to the churchyard with a proposed ‘Gods Acre’ sign for the churchyard. The information on these signs should be related to information for the other churches in the benefice, and a meeting will be arranging with the churchwardens and treasurers of Horspath and Cuddeson to take this forward. We also intend to review internal notice boards and signs, and the positioning and display of literature
Routine maintenance
The church tower clock has been refurbished, and other minor maintenance and repair work has been carried out, including the water boiler in the servery, and work needs to be carried out to replace glass on one of the millenium floodlights.

Planning permission for a new house adjacent to the church
Planning permission has been given for a three-bedroom house on the site of the present poultry houses in the paddock to the South of the church. This will involve work on the stone wall by the road to improve the line of sight for access, which will make the entrance to the church parking area safer.

NADFAS survey of the church
A local group of the the National Association of Decorative and Fine Arts Societies (NADFAS) have been carrying out a detailed survey of the church and all furnishings and fittings and are nearing completion of their survey, which will be a valuable record for us as a church.

Work in the burial ground
There has been serious invasion of the burial ground by badgers, which affected land potentially used for burials, and work was undertaken in the year to deter them from using the ground.

Use of Fabric Funds
We have revised the guidance used to allocate expenditure from the Fabric Fund, so it is clearer which expenditure relates primarily to the fabric the church building, maintenance and insurance.
John Hall (for the PCC Building and Heritage sub-committee)