Horspath Church of England School has a long and close relationship with St Giles which dates back to the 19th Century. In 1825 Dr. E. Ellerton, the curate, bought two cottages with land attached, in Horspath, which he devised by will to Magdalen College for educational purposes; one cottage was to be used as a house for the school-mistress and the rent from the other was to provide free schooling for twelve to fifteen poor children who were to be members of the Established Church. The boys were to be taught reading, writing, and the Catechism, and the girls knitting, sewing, and marking. The school had not come into being by 1835 when the only school was one for ten children taught at their parents’ expense, but its existence is recorded in 1842. In 1856 Magdalen College advanced £100 towards the building of the present school, and the two cottages were annexed to the perpetual curacy of Horspath. In 1864 the College gave £50 to build a school-mistress’s house. In 1871 the school had accommodation for 71 and an attendance of 48; in 1873 it was enlarged with help from the National Society and had accommodation for 100. Further grants were made by Magdalen in 1901 and 1908. In 1906 the average attendance was 73. In 1946 the older children were transferred to Littlemore County school, and the school was reorganized as a Church school for juniors and infants. To this day, the school and church enjoy a successful and mutually beneficial relationship. 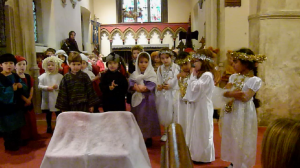 The school and church enjoy several joint events. The village fete, typically held every two years, is organised by the church and the school PTA, and raises funds for both. The reception class nativity play is performed in the church each December and regular visits by the whole school occur during the year. The vicar of St Giles is a school governor, along with two other Foundation Governor’s drawn from the church community, and leads school assembly once a fortnight. The Church also fund half of the cost of the school Bibles which are handed out to leavers at the end of Year 6.

The school’s ethos and value are firmly rooted in its Christian heritage and warmly embraces all those of different faiths and none.  The school also follows the national curriculum for religious education which encompasses knowledge about all faiths and beliefs, stressing the importance of respecting them.  This is reflected in the school’s policy for collective worship and religious education that allows for any parent to withdraw their child from them.

Independently of Ofsted inspections, the school receives SIAMs inspection to evaluate the distinctiveness and effectiveness of the school as a church school. These typically take place every five years; the most recent inspection was in July 2013 and reported that “the school has an ethos of inclusion, care and respect which is underpinned by Christian values”.