On Sunday 15th October all creatures great and small were welcomed to St Mary’s in Garsington and St Giles’ Horspath for a special animal friendly Pet Service.  It is around this time of year that we remember Saint Francis, the patron saint of animals, who spoke to the birds and was a friend to the animals, calling them his brothers and sisters.  To celebrate our four footed friends and give thanks for all they give to us, we held two separate Pet Services in Garsington and Horspath.  Both attracted a wonderful array of animals with their owners.  At Garsington we welcomed eight dogs and two cats, while at Horspath we were joined by rabbits and the unusual Madagascar hedgehog like animal called tenrecs, brought by Charles and Julie Gurden.  The Oxford Mail, who heard were were holding this event, sent a photographer and took posed photos before the service which appeared in Tuesday’s mail along with a good write up of the service.

Those who did not have animals brought their soft toy animals.  Chris Drew at Horspath introduced us to hi Teddy bear of over 65 years old and we also met a monkey, wombat and Gordon the gopher.  At the service Emma Also told us about the story of her dog Flossie who was rescued from Ireland.  When she first came to England she was deeply traumatised and couldn’t go on a lead without lying down in a submissive manner.  When Emma and her family first met her she was too shy to venture out of the shed to see them.  So they decided to take home a more friendly dog, called Bess.  It was only when Jonathan went to get the cash to give as a donation that Flossie ventured out and went and placed her head on Emma’s lap, looking up into her face as if pleading to be taken with us.  Of course, on Jonathan’s return he was told that we had changed our mind and Floss had to come with us, she had chosen us.  Since then it has taken a while to build up her trust and confidence to become the lovely dog she is today.  Her story was likened to that of St Francis who, through kindness, built up the trust of a wolf that had been ravaging the countryside until they made a pact that the wolf would stop hurting lambs and people and instead be fed daily by the villagers.  A story that speaks of our mutual relationship of need with animals.

These are the photographs taken by the Oxford Mail.  Please see the gallery for more. 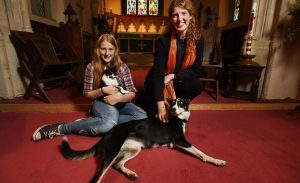 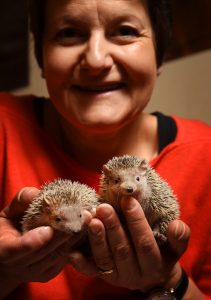 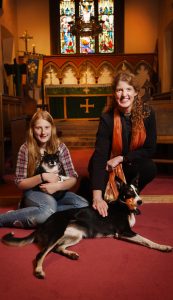