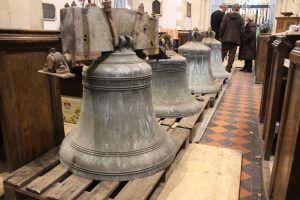 Four of the six bells

On Wednesday the 18th October, four of the six bells which hang in Cuddesdon church were available for viewing before they are taken away to be restored by Whites of Appleton.  The tower has long been silent due to what was believed an unsafe frame.  Now they have been brought to the light before being restored.  This has been a major task because a crossing vault was constructed in the nineteen-century which prevented them from being lowered over the altar.  This has meant that an old door has been opened up once again, a hole broken through the ceiling from the bell chamber into the ringing chamber and then scaffolding erected over the organ, north transept and north nave to be able to winch the bells down.

Below is the  information which Brian Lowe, the acting Tower Captain, handed out to those who came to the open evening and tells you a bit more about the bells.

THE SIX BELLS OF ALL SAINTS CHURCH, CUDDESDON.

During the Reformation in the short reign of Edward VI, an inventory of Church bells in England was taken (Cuddesdon included), and the entry read:  “4 belles and 1 litle bell).  None of these bells from the 1550s now exist, and they would have been replaced by the three bells made in 1617 by Henry Knight of Reading, which are now the second, third and fourth bells of the present ring;   the treble was cast in 1795 and may also have originally been a Henry Knight bell.   Later there was added the fifth of 1677 and the tenor of 1709, but these were eventually replaced by the Whitechapel fifth and tenor of 1863, which are here today.   The six bells hang in the central tower, hung for “full circle ringing” in a wooden frame with wheels and ropes, to enable ringers to ring the bells from a ringing room high in the tower.  In recent years they have become somewhat challenging to ring, so that hearing these lovely bells has become a rare occurrence. Thus the decision was taken as part of the overall restoration project at All Saints to remove the bells, and you can see them here before they go to the Church Bell-hangers, Whites of Appleton.  The bell frame is to be reinforced, and in about three months’ time five of these bells will be rehung;  the one that will not be included in the six is the present treble (lightest) bell, which has been found to be porous. Thus a brand new treble bell was cast at the famous Whitechapel Bell Foundry in 2017 – on the very last day that the foundry cast bells after some five hundred years of bell casting!  This treble bell is inscribed “To the Glory of God and in loving memory of Dr. Christopher Ware, 1955 – 2006”.  Very few bells exist in England that are not similarly dedicated, and below is a list of the Cuddesdon bells with their founders’ names, dates and weights.   The oak frame dating from the seventeenth century was renovated in 1949 by Messrs. R. White & Son, who then rehung the treble, fifth & tenor with new gear, type E.  The fittings of the remaining bells,  type C, date from the 19th. century.