The Jay Sheldon Trust is a charity which aims to raise money for research into the little known ‘childhood’ cancer Desmoplastic Small Round Cell Tumour (DSRCT). 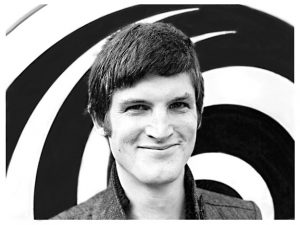 The Jay Sheldon Trust has been created in memory of Jay Sheldon. Jay was 29 years old when he was diagnosed with DSRCT and 31 years old when he died from it. He left behind a young widow, two small boys, a promising career and a hope that his dying would not be in vain.

‘Walking For Jay’ is designed to launch the Jay Sheldon Trust. Jay’s mother Katrina and her Labrador Zebbie (and some help from intrepid friends) are going to walk from Western General Hospital in Edinburgh, where Jay was treated for DSRCT, to Oxford (his childhood home town). This will be a journey of around 500 plus miles, using footpaths, tracks and bridleways and avoiding roads as much as possible. They will start on 26th August 2017 and, if all goes well, will finish in the centre of Oxford in late September or early October. The main purpose of the walk is to raise public awareness of DSRCT and hopefully also raise funds for research into the disease.

DSRCT is a rare and devastating sarcoma with a dismal outcome. It affects children and young adults, and the average age range is from 15 to 30 years old. The five year survival statistics are very poor – less than 15%. It is a fast growing stealth bomber of a tumour that even after treatment rapidly and readily returns. It is difficult to diagnose, not least because the understanding of the disease is restricted to a few specialists worldwide, but also because often the symptoms of DSRCT only start to manifest themselves when the tumour is already large. It frequently grows intra-abdominally so it can be easily confused with other conditions such as Irritable Bowel Syndrome (IBS). By the time of Jay’s diagnosis and subsequent operation, his tumour weighed 5kg.

There is a very real need for research funding into this cancer despite (and indeed because of) the disease’s rarity. Currently there is virtually no funding for research into the DSRCT and therefore it remains a largely unknown cancer, even among clinicians. The Jay Sheldon Trust aspires to raise both funds for and the profile of this highly aggressive and little understood disease.  All funds raised will go into research of DSRCT. The Jay Sheldon Trust is particularly interested in achieving a better understanding into the cause of the disease, a better and earlier diagnosis, and a more effective and less brutal treatment regime.

DSRCT will almost certainly never attract the attention or funds of the larger cancer charities and foundations. The hope is that Jay’s legacy will help others in the future.

Any support would be very welcome whether it is following our journey on social media or sponsoring us.  If you would like to sponsor Walking for Jay this can be done either through www.justgiving.com/crowdfunding/walkingforjay or by cheque made out to ‘Jay Sheldon Fundraising’ and sen to

You can follow us on Twitter and Facebook: WalkingforJay or on Instagram: zebbiewalks4jay. Most enormous thanks to everyone who has helped and supported us in so many ways – we couldn’t have got this far without you.  Special thanks to Colourplus, who sponsored our T-shirts, Christine Green who created the logo, The Book House in Thame who subsidised the maps, Pets Corner, who are providing the dog food and to a donor who I know would like to remain anonymous but has been invaluable in every aspect of the planning.  I just hope that I don’t let any of you down and most importantly don’t let Jay down.