A group of 28 people from across the three villages of Garsington, Cuddesdon and Horspath spent an enjoyable afternoon exploring the sights, sounds and history of Magdalen College, Oxford on Wednesday 13th June.  The Dean of Divinity, Jonathan Arnold, met us at the Porter’s Lodge and showed us the Chapel and Cloisters which were founded William Waynflete and built by in 1458 and had changed little since that time.  We also saw the newly restored dining hall which was laid up for formal dinner and were introduced to the new white stag that had been recently introduced to the herd of fallow deer that adorn the deer park at the College.

The highlight of the tour was the old library where Jane, one of the archivists, brought out some of the extraordinary treasures that Magdalen College holds.  These included three fragments of papyrus which date from the late second century AD and amongst the oldest know fragments of the New Testament.  We also were shown Thomas Wolsey’s Bible with its very fine manuscript decoration.  Finally, and best of all, Jane gently brought out William Waynflete’s silk slippers, inner shoe and silk stockings which he wore at his consecration to Bishop of Winchester in 1447.

The afternoon ended with tea and cakes in the New Room followed by Choral Evensong in the Chapel sung by the boy choristers. 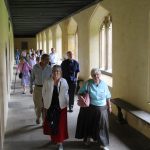 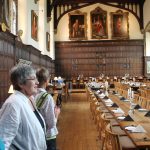 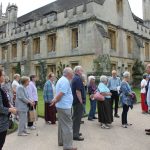 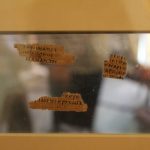 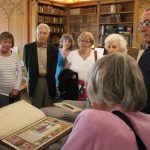 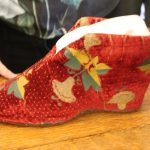 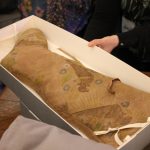 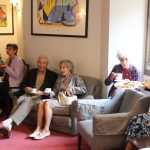 We would like to thank Jonathan for hosting the event and to Jane for showing us round the library.

Please see a link to the Wolsey manuscript and Magdalen choir.