A historic event took place in All Saints’ church on Saturday 21st April, a new tenor bell was consecrated and the other five restored bells rededicated at a ceremony performed by the Principal of Ripon College Cuddesdon, Bishop Humphrey.  The church was full for this once in a generation moment.  After words of welcome from the Vicar and prayers of thanksgiving for all who had made this restoration possible through their generosity and skill, Bishop Humphrey began by sprinkling all the bells with holy water.  He then consecrated the new tenor bell which was cast at Whitechapel Bell Foundry on the very last day that the foundry cast bells after some five hundred years of bell casting.  The consecration began with the bell being anointed with the oil for the sick and the sign of the cross was placed on the lip of the bell at six places to awaken those who hear the bell to the attributes of God thereby giving healing to all who hear it.  Then using the oil of chrism the under lip of the bell was anointed on the four points of the compass thereby dedicating the bell to the praise and glory of God.  As well as consecrating the tenor bell, the Bishop also rededicated the other five newly restored bells and blessed the ropes which will give the bells voice.  The brief service ended with all the ringers saying together the ringer’s prayer and the evening concluded with celebratory drinks.  Thanks go to all those who have made this possible through donations, fund raising and grant applications.  Many people deserve recognition for the role they have played, however those who have been the movers of this project are Keith Hawley, Waveney Luke, Richard Palmer and Robert Wilson, along with Linda Ware whose late husband Dr Christopher Ware is remembered in an inscription on the new tenor bell.  Our thanks also go to the skilled artists at Whitechapel Bell Foundry and to White of Appleton for restoring the bells.  We look forward to the bells ringing out once again and will be holding a celebratory part later in the summer to ring them.

Consecration and blessing of Cuddesdon bells 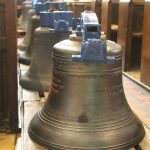 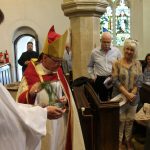 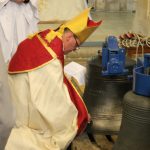 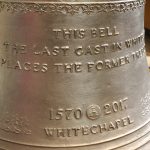 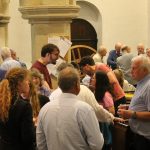 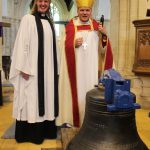