For the past two and a half years a small group of Church Recorders from the Arts Society Oxford, have 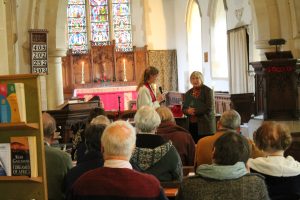 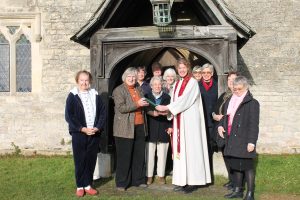 been working on a Church Record for St. Mary’s.   Such a record is a comprehensive document which lists the furnishings, artefacts and some of the fabric of a church.   Objects are divided into sections entitled, Memorials, Metalwork, Stonework, Woodwork, Textiles, Windows, Paintings, Library and Miscellaneous.   Each object is described in a prescribed format and may be photographed.   Where possible, it includes the history checked against published information.   Thus the final Record contains the heritage of the local community, and is a document of local and social history.   Copies of the Record are placed in the V&A in London, the local County Heritage Centre and Historic England so that it becomes a source of information for future researchers.

The group met once a month and spent a couple of hours in the church making notes on the particular sections they were working on, undertaking further research between the meetings and then writing up their notes in the format required.   Measurements had to be taken, some items weighed, Latin on some of the memorials translated, and a lot of time spent looking up historical archives to ensure as much information as possible had been collected.    Photographs were taken of the more significant items recorded and are included in the Record so that it can clearly be seen what is being described.

Memorials in any church are probably one of the most fascinating to research and two in particular threw up some unexpected stories.  Research into the first, ‘to the memory of Henry W.M. Singleton’ a Commoner of Trinity College Oxford, produced the fact that the burial register states he was killed at the turnpike gate at Gosford (Kidlington).   He and a fellow student appear to have raced on horseback along the turnpike after going to the races and his horse ran into the toll-bar throwing him insensible, whereupon he died two hours later.

A much earlier floor slab commemorates the life of Isabella de Fortibus, born in 1237.   She was a great heiress, daughter of the Earl of Devon who married William de Fortibus, Earl of Aumale, or Albemarle, who owned the Isle of Wight.   As heir to her father she had many lands including Tiddington with Albury and Nuneham Courtenay but oddly enough nothing in Garsington.   It seems, however, that people of wealth were often commemorated in more than one place.   There is much more about this lady in the Record.

The final task was to compile all the sections into a bound document which will be presented to the Church following the Service on 19th November.

I would like to thank John Hall, Churchwarden, for all his help as the group progressed through their work.