On the 10th November 1917 one of the bloodiest episodes of the First World War came to an end.  Named after the small village just five miles north-east of Ypres, the word Passchendaele has come to symbolise for many the horror and sheer folly of the Great War.  As Lloyd George wrote in his War Memoirs which were published in 1938 ‘Passchendaele was indeed one of the greatest disasters of the war… No soldier of any intelligence now defends this senseless campaign’.  Perhaps at the time it did not seem senseless but by the October of 1917 when the suffering of so many men and thousands of teams of horses had made little inroads into the enemy lines, it was clear that there had been a catastrophic incompetency in leadership of the British Generals.  In a now famous remark made by two German generals, one of them claimed that the British fought like lions.  “True,” the other replied, “but they are lions led by donkeys.”

The beginning of the conflict started with what seemed a simple idea, to break the U-boat stranglehold of the ports of Ostend and Zeebrugge.  But right from the start there was a misjudgement on behalf of General Haig who believed that the Germans were exhausted after the Battle of the Somme and it would only take a quick strike through Flanders to break the enemy’s line.  Not everyone supported this plan but with Haig’s insistence that it was vital to keep up pressure on the western Front and no other credible ideas at the time, the Prime Minister David Lloyd George allowed the command to be given.

So on the 31st July 1917 the third battle of Ypres started.   Haig decided to shell the Passchendaele ridge, an area of high ground near Ypres which was held by the Germans.  Surrounded by low, open plains the ridge was well defended: fresh battalions waited miles behind the line and hundreds of bombproof machine gun nests and artillery posts overlooked no-man’s-land.  They even had stores of mustard gas ready to release.   After ten solid days of shelling the low marsh area around the ridge, which had already been churned up by countless years of shelling had turned into a muddy slime.  Then it started to rain.  Haig had been warned by weather experts that there was often heavy rainfall in the region of Flanders, but in the summer of 1917 it was the worst for 30 years.  Shell craters in no-man’s-land soon filled with water and the only way to make progress across the quagmire was to creep along over duckboards.  Wounded and exhausted men often slipped into the mud only to disappear, 42,000 of them along with horses and tanks were swallowed up by the mud and still lie buried there today.

But Haig pressed on with the battle, ordering his troops to attack under the protection of a new artillery tactic, known as creeping barrage.  This relied on gunners shelling the ground immediately ahead of the charging infantry.  As the men advanced, the gunners adjusted their range to keep the shells landing just ahead of them.  If all went to plan, the infantry would be supported up to their target but in the chaos of battle creeping barrage was notoriously difficult to control and many men were killed by their own gunners.

By October the German and British forces had become locked in a mud-drenched stalemate which had lasted for a month and a half, with Australian and New Zealand divisions joining the British in September.  It is striking how similar are the two eyewitness accounts which we heard read out, so much so that if you were not told who wrote which you probably would not have known that one came a British soldier and one from a German soldier, on the opposing side.  Such was the equal misery of all the men who found themselves on the battlefield of Passchendaele.   After three months, one week and three days of brutal trench warfare, the Allies finally recaptured the village of Passchendaele – but by then around a third of a million British and Allied soldiers had been killed or wounded in some of the most horrific trench warfare of the conflict.  Finally Haig agreed to end the battle but the U-boat bases had escaped attack and only five months later the Germans would retake every inch of the ground they had lost. 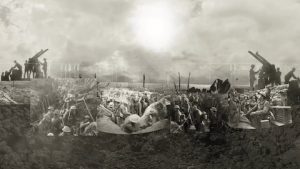 Even in its day, Passchendaele was controversial with General Haig being constantly pressured to halt the attack.  History has equally questioned Haig’s motives and he has been condemned by some historians for what has been perceived as a flagellant squandering of human life.  For many reasons, it is perhaps Passchendaele which led to the general opinion that the Great War was a disastrous waste of human life that was compounded by the deficiencies of those who were supposed to be leading it.  Their folly still sends ripples into the present.  Long gone are the days of automatic deference to the wisdom of the upper classes and educated.  As Siegfried Sassoon’s poem so powerfully shows wisdom is no longer seen as the premise of the Squire.  A new kind of wisdom that was forged in the trenches of Flanders comes not through privilege or age but through suffering, comradeship, sacrifice and duty.  This more gospel wisdom is expressed in a poem by Lt Gen Hal Moore when in ‘We Were Soldiers Once and Young’ he writes,

‘We went to war because it was our duty. That is

one kind of love. Another and far more 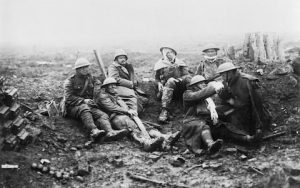 transcendent love came to us unbidden on the

has ever fought. We discovered in that

depressing, hellish place, where death was our

constant companion, that we loved each other.

and we wept for each other. And in time we

came to love each other as brothers. In battle

our world shrank to the man on our left and the

man on our right and the enemy all around. We

held each other’s lives in our hands, and we

dreams, as readily as we shared what little else

On this Remembrance Sunday, when we recall the sacrifice and suffering of those who fought and died at Passchendaele a hundred years ago, let us all seek forgiveness for our own follies and strive for the wisdom of Christ whose transcendent love brings heaven out of hell, shines light into the darkness and transforms despair into hope.  Amen.