Two weeks to go and, dare I ask, how are your preparations for Christmas going?  Every year I promise myself that I will start early and allow myself plenty of time to get ready so that I don’t have that awful feeling around about now that everything is spiralling out of control.  The Advent calendar is a wonderful thing but I can’t help seeing it sometimes as a ticking time bomb which seems to slowly count down the days I have left to get everything ready rather than be a chocolately treat every morning.  During assembly last week we made a list of all the things that have to be done and I am sure you are not surprised that I ran out of fingers and toes on which to count them all.  There are some people of course, like my late Grandmother, who gave us our Christmas presents in August but for the rest of us who can’t bear to think about Christmas till at least Bonfire night has come and gone, we have the inevitable rush and stress of getting ready for the big day.  Because intrinsically that is what we are doing, preparing for a single day of celebration.

There was a children’s programme that was called Celebration, which obviously met the requirements of RE teaching for Key stage 1.  However, it did it very well by focussing on the important celebrations or festivals in different religions.  For example, there was an episode on Diwali, the Hindu festival of light where we were shown all the preparations that a family for it.  They made the traditional food and bought amazing looking sweetmeats, they prepared small lights by dipping cotton wool in wax and placed them in cake cases, they decorated their homes and painted their hands and feet.  Finally when the festival arrived we saw the young girl and her family delight in exchanging presents and sharing the feast they had prepared.  There was, of course, another episode on Christmas and they did it really well.  Telling the story of Jesus and showing all the traditions we have and love.  But somehow, it seemed to miss the point and I am sure that the Hindus who watched the episode on their festivity Diwali would say the same.  Of course we are preparing for a single day of celebration, a day of feasting and gift-giving, when we remember the story of Jesus’ birth but to those with the eyes of faith the 25th December is more than just a day of celebration.  It is the time when we wonder at the enormity of the love that God has shown for us in becoming a human being and taking into himself the suffering of this world.  We need the season of Advent to constantly remind of this and challenge us in our preparations and our priorities.  Buying presents, decorating the tree, writing Christmas cards and ordering the turkey can easily become self serving distractions when confronted with that more illusive call to prepare the way of the Lord.

So what does it mean to prepare the way of the Lord.  Well, one aspect is summed up in John the Baptist’s call to repentance.  Look within yourselves, consider your heart and turn back to the Lord.  Just as you prepare yourselves outwardly so you must prepare yourselves spiritually.  We all do this in different ways, suited to our circumstances.  Taking a Quiet Day is just one way of doing that, setting some time aside to reflect and pray, to attune the ear once more to God’s voice.  Reading the Bible or devotional book, or just some quiet time during the day is another.  So these internal preparations help us to enter more fully into the mystery of Christmas.

Another aspect of preparing the way of the Lord looks beyond the feast of Christmas and into the future coming of the kingdom which has been revealed in the work and life of Jesus but has not as yet been brought to fulfilment.  We live, not in the age of consummation but still in the time of waiting and preparation for the kingdom.  The empty chair of the incarcerated 2010 Noble Peace Prize winner Liu Xiaobo who died last year, still stands as an image of Advent waiting and hope.  Justice and peace will come and is coming but for many it is not yet.  John stands in the wilderness and cries out to people to repent in their hearts but it is he who also ‘prepares the way of the Lord’ by his words justice.  We still need our John’s to call us to personal repentance but also to justice for whilst in the works of Jesus the new age of God’s kingdom on earth has begun, it is still not been brought to fulfilment.  Preparing the way of the Lord therefore has a political and social dimension which works to bring in God’s kingdom of justice and peace.  With its eyes firmly fixed to the future Advent constantly reminds us of this and our continual need to prepare the way of the Lord.

To prepare for the way of the Lord is therefore not simply a finite act which ends in the feast of Christmas but rather is a state of being.  Advent is the time when we once more attune our ears to listen to God in our hearts and in our world.  It challenges us to awake from the distractions of the festival and acquire wisdom, that Godlike quality which was with God before the world began and be one of the just within our society.  We are not just to listen to John the Baptist but to become like him, the messenger who prepares the way of the Lord.  This is indeed a call which will lead us more deeply into the mystery of the Incarnation and into the revealing of the kingdom.

I would like to end with a Peanuts cartoon. 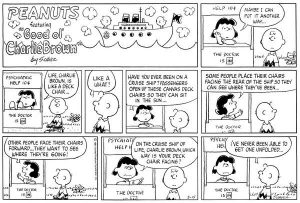 As you may remember, Lucy in Charlie Brown has a counselling stand.  On this particular cartoon she sets up her stand and Charlie Brown comes to see her.  Charlie Brown, she says “On the great cruise ship of life there are two sorts of people, those who place their deckchair at the back of the ship and are always looking to the past and those who place them at the front, looking to the future.  Charlie Brown, you must decide where you are going to erect your deckchair on the great cruise ship of life.”  Charlie Brown replies “Yes, but I don’t know how to put up my deckchair.”  John the Baptist takes us from the past to the future and shows us how to become messengers of the Lord, how to prepare the way of the Lord and make his paths straight.  Let us not be so concerned in our deckchairs that we miss the point of life.  Amen.