On Sunday 11th November the new Horspath village war memorial was unveiled and dedicated at the Act of Remembrance.  Many villagers turned out in beautiful sunshine to commemorate the centenary of the end of the First World War and see the new memorial to the fallen being dedicated.  The original idea for a memorial came from Keith Brooks who for a number of years had constructed 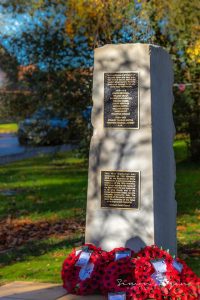 his own focus for Remembrance day outside the shop.  To mark the end of the First World War, the Parish Council, headed by Peter Dobson, commissioned a new permanent memorial to stand on the green in the fork of the road under the trees.

The quarry block used for the memorial originated from Portland in Dorset and is from Jurassic limestone about 145, 000 million years old. Its use here is fitting as the new Horspath memorial is cut from the same stone as used by the by the Commonwealth War Graves Commission for the Cenotaph in London for these who died during the two World Wars.

The one and half tonne block shows its deep and multi-faceted history embracing its extraction from the ground and subsequent journey from Portland to Horspath. Incorporating a rough quarry face that represents the indelible connection to the land for this village, through to the rear, rough sawn sides where the block was extracted from a much larger seam, and a smooth face prepared for the plaques. Each chip and crack in the stone was a natural occurrence from the extraction process, a stone that has been forcibly changed due to the processes it has been through, not unlike the changes the village has endured through the good and bad times. Each battle scar does not take away from the stone, rather it enhances and shows how it can stay together strong, defying what has happened to it. The same can be said for the fallen in the village, each person’s memory cherished not only by kin but by the community as a whole. Their parting leaving a space permanently empty yet showing the grit and determination of a small Oxfordshire village to keep going.

“It is an entirely appropriate memorial to commemorate those lost during the Wars. Thoughtfully designed to be in keeping with its location – a village green with trees, dappled sunlight with a local stone wall behind.”

The designer’s vision was to have a stone that showed its character and journey to Horspath. He felt his interpretation and design was the right memorial for the village, something that tells a story. Unique to the villages rural and industrial nature and promotes residents own imagination – thoughts of those villagers who fell in the two World Wars.

The stone brings together the names of the fallen commemorated on the war memorial in the St Giles Church and the former Methodist Chapel, now the Horspath Community HUB:

Sergeant Bricknell was a regular soldier, based at Poonah, India, and was part of the 1st. Battalion which landed at Basra and then marched up the River Euphrates to assault and take Baghdad.  He was killed at the battle of Ctesiphon when the British were forced back to Kut, where 13,000 surrendered.   Such was the confusion and rout at Ctesiphon that he has no known grave.   He is honoured on the Basra Memorial.     Son of Abel & Emily Bricknell, and lived on the Village Green.

A cavalryman, he went out to Egypt in April, 1915, and in August landed at Suvla Bay, Gallipoli.  He became one of the very many casualties of this failed campaign, abd was evacuated to Alexandria where he subsequently died of his wounds.  He lies in the Alexandria Military and War Memorial Cemetery.    Lived on Manor Farm Road.

These two Horspath men almost certainly joined up together, being in the same Company, if not Platoon.  James Munrt died the day before the onset of the battle of Loos,  and George Chiddington perished four months later near Loos.   Having no known grave,  they are commemorated on the Loos Memorial.  James Munt was confirmed here in 1907, and George Chiddington was the son of George & Selina Chiddington, who resided in the hamlet of Blenheim.

After service on the Somme, William Harris became a member of the small force sent to bail out the Italians in the Southern Alps,  and was killed at the battle of Asiago.  His grave, high in the Alps, is only accessible in the summer months due to the snow at that height.   Opposing  Sergeant Harris in that battle was a certain German officer, Erwin Rommel,  famous in WW2 as the Desert Fox !   William Harris is buried in the Boscon cemetery together with another 155 Ox & Bucks men.     Son of William & Dorcas Harris, of Prospect Cottage.

The following four men were all victims of the prolonged and bloody Ypres campaign,  though none were killed during the three main battles – they were simply just four of the thousands of fatal casualties of the daily shelling and sniping of that unremitting trench warfare.

He rests at the Guards’ Cemetery, “Windy Corner”, Cuinchy, France   Son of William & Alice Heritage, he also lived in Blenheim,   next to George Chiddington.

He is commemorated on the Menin Gate Memorial.     Son of Joseph & Rosa Hinton, who lived at 21, The Green.

His grave is in Tyne Cot Cemetery.     Son of James & Elizabeth Hinton, who lived in a part of the Malthouse.

His memorial appears in the Methodist Chapel, but not in St. Giles Church.  He lost his life in a dreadful munitions factory explosion at the National Shell Filling Factory, Chilwell, close to Nottingham, and lies in a communal grave at St Mary Magdalene Church,  Attenborough, Notts.    His family lived at Bullingdon Green, to the east of the village.

He was not from Horspath, but is commemorated on a privately erected brass plaque in St Giles, since he came from a military family living in Hollow Way,  Cowley,  but whose parents worshipped here and who are both buried in the Churchyard.      He is buried in the Tuileries Cemetery, Paris.