‘With a single drop of ink for a mirror, the Egyptian sorcerer undertakes to reveal to any chance comer far-reaching visions of the past.  This is what I undertake to do for you, reader.  With this drop of ink at the end of my pen I will show you the roomy workshop of Mr Jonathan Burge, carpenter and builder in the village of Hayslope, as it appeared on the eighteenth of June, in the year of our Lord 1799.’

So opens George Eliot’s novel Adam Bede.  The village of Hayslope is much like Horspath was around the turn of the nineteenth century where all the talk is of ‘th’ Methodies’ and the uncommon pretty young preacher who is going to speak on the green that night.  And Dinah certainly can preach as she speaks from her heart in a natural voice about the simple faith which had been inspired through hearing Mr Wesley preach.  In a style and tone they had not heard before, Dinah tells the assembled crowd that Jesus had come to give them a message of good news which was for the poor and simple just like them.  Through the power of her voice and the conviction of her faith, Dinah calls the crowds to personal repentance and confession of Jesus as their Lord.

‘Dinah had been speaking at least an hour, and the reddening light of the parting day seemed to give a solemn emphasis to her closing words.  The stranger, who had been interested in the course of her sermon, as if it had been the development of a drama – for there is this sort of fascination in all sincere unpremeditated eloquence, which opens to one the inward drama of the speaker’s emotions – now turned his horse aside and pursued hi way, while Dinah said, “Let us sing s little, dear friends;” and as he was still winding down the slope, the voices of the Methodists reached him, rising and falling in that strange blending of exultation and sadness which belongs to the cadence of a hymn.’

George Eliot writing in the mid 1850’s captures the heartfelt enthusiasm of the religious revival John and Charles Wesley had started over a hundred years previously.  Being barred from parish churches Wesley and his fellow preachers had taken to the fields to speak in the open air and, like Dinah, had drawn large crowds with their passionate call to repentance and personal experience of salvation.  John could have had an illustrious career in the university, having studied at Christ Church and then elected fellow of Lincoln College but at his ordination to the diaconate which was merely a formality for all fellows of that day, a change happened and John began to seriously reflect on the religious truths of his time.  From reading Thomas a Kempis, Jeremy Taylor and especially William Law, John started to have a more serious view of living out the laws of Christ, both inwardly and outwardly.  As a result he began to lead a more rigidly, methodical and abstemious way of life, he studied the Scriptures and deprived himself of luxuries so that he could give alms to the poor.  He began to seek holiness of heart and life.  So much so that in 1727 he was ordained a priest and left Oxford to serve his curacy in Wroot, Lincolnshire, where his father Samuel was Rector.

On the request of the Rector of Lincoln College John returned to Oxford in 1729 and began to lead a small club that his brother Charles had started a year previously.  This group of young men met solely for the study and pursuit of a devout Christian life.  Their regime was rigorous and transformative.  They met daily, rising at 6 am for three hours of prayer, psalms and reading the Greek New Testament.  They sought to make prayer continuous throughout the day and received communion every Sunday, without fail.  Every Wednesday and Friday they fasted and also began visiting prisoners in jail.  Their obvious piety brought them into conflict with the religious authorities who saw them as fanatics and branded them as a ‘Holy Club’.   Yet ironically it was for their so-called their High Church ministry that they were condemned by the American colonists of Savannah, Georgia where John and Charles Wesley went as missionaries in the mid 1730’s.  Depressed by their failure to live out their ideals, John and Charles returned to England.  It was at this the lowest point in his life so far that John had an experience which transformed him and led to his mission to revive the church through Methodism, as he called it.  On the 24th May 1738, John noted in his diary hearing the choir of St Paul’s cathedral singing the words of pslam 139 ‘Out of the depths have I cried to thee’.  He goes on to write:

‘In the evening I went very unwillingly to a society in Aldersgate Street, where one was reading Luther’s Preface to the Epistle to the Romans. About a quarter before nine, while he was describing the change which God works in the heart through faith in Christ, I felt my heart strangely warmed. I felt I did trust in Christ, Christ alone for salvation, and an assurance was given me that he had taken away my sins, even mine, and saved me from the law of sin and death.’

From this sense of personal salvation John began preaching a gospel of grace.  Scripture was central to his teaching as it was only here that he saw the living core of faith being revealed.  He rejected any sense of predestination, that some people were chosen for salvation before they were born and others not, and understood everyone to be called into a deep relationship of love with Christ through grace alone.  It was this grace which made a Christian what he called ‘perfect in love’ and able to live with a primary regard for the good and needs of others, especially the poor.  To love one’s neighbour, for John Wesley, was to fulfil the law of Christ.  Hence we find him preaching in the fields to the poor agricultural workers, and industrial outcasts through words that powerfully called sinners to repentance and evoked a deep emotional love and longing for the Lord through personal encounter with Christ.

It was a vision, a reformation of the church in its day, which caught the hearts and souls of many, especially those who worked in the engine room of the industrial and agricultural industries of the nineteenth century and left neglected and marginalized by the institutional church.  By the time George Eliot describes Dinah preaching at Hayslope, Methodism had grown into a sizable sect.  Here in Horspath the 1851 census reveals that over 50% of churchgoers were Methodists.  Originally meeting in cottages for prayer and discussion, in 1871 the wooden Chapel was opened on the Oxford Road.  But attendance grew and a larger Chapel made of brick was built in 1909 and is the one we know today.  For over 100 years psalms were sung there, prayers said, the gospel preached and an enormous amount of good works were performed.  Sadly though with the general decline in religious affiliation many of the Methodist Chapels have increasingly ceased to be centres of worship.  Some have been converted into homes but others, thanks to the amazing work and dedication of the Friends of Horspath and people like them, have continued Wesley’s vision of serving the poor in loving care of one’s neighbour and reaching out to bring people together into community.

Jesus tells us to take up our cross and follow him.  But what, may you ask is our cross?  Is it the decline of Methodism and the heartache which surrounds the closure of a place of worship that was so loved and honoured by many in Horspath and still holds such precious memories?  Is it the burdens and illnesses that we must bear in this life, the fantasies and sins that bind so close?  Is it the needs of others that we are called to share and call our own?  Is it the cross of Christ, an instrument of pain and torture which he made into the gateway and door of salvation and divine consolation?  It is of course all of these. 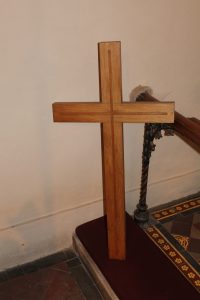 Giles where it will hang, not just as an object of our joint religious heritage, but as a witness of the living faith which we all have, past and present, in Jesus Christ our Lord.  A faith which is our own personal call into relationship with him who pours his grace into our hearts that we may continue to serve him and our neighbours in all holiness and righteousness.  Not because we are holy or righteous but because we recognise that it is through him and from him we have all goodness and the grace to be his followers, to take up our cross and follow him.  As a benefice we celebrate today that we are united as people who follow Christ, regardless of parish or affiliation, who shoulder each other’s burdens, preach the gospel of peace to those in poverty, whatever form it may take, and to serve the good of our community.   In this way it is we who continue, along with our Methodist brothers and sisters and in the words of John Wesley himself, to confess our wholehearted trust in Christ alone, who takes away our sins and saved each and every one of us from the law of sin and death.  Let us remember this truth and may it strangely warm our hearts and equip us to live out our call to ‘take up your cross and come follow me’.  Amen.