Preached by Rev’d Dr Emma Pennington at the Benefice Celebration Service for Lammastide at All Saints’ Cuddesdon on 6th August 2017. 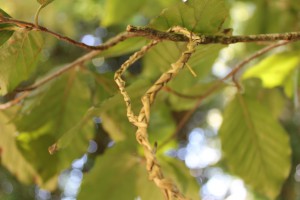 hanging in the branches that border the fields of wheat.  To all sense and purposes they look like plaited grasses which are then tied at one end and loosely hung on the nearest twig.  Who they are made by and why they adorn our field verges, I do not know, but they remind me of one of the many ancient traditions that are connected with Harvest Time.   Perhaps you are more familiar with the tradition of corn dollies, those often elaborate creations made from wheat stalks which were fashioned from the last sheaf of wheat and ploughed into the ground as a winter home for the spirit of the corn to reside in until the spring.  But the rough plait of three stems that you will find at this time of year, at the beginning of the harvest rather than at its conclusion, harks back to what was known as the ‘countryman’s favour’.  This love token was reputedly made by a young man as he would harvest the crops and then given to his sweetheart.  If she was seen wearing it next to her heart when he saw her again then he would know his love was reciprocated.  The countryman’s favour like the corn dollies is just one of the many ancient traditions surrounding this special time of the year.

Another of course is what we are celebrating today, the feast of Lammas.  The word Lammas first appears in the writings of King Alfred in the Anglo Saxon period and is thought to be derived from an old English word for loaf.  At around this time of year it was customary to bring to church a loaf made from the new crop which was being harvested.  For our somewhat superstitious ancestors the blessed loaf often imbibed it with magical properties.  One Anglo Saxon book of charms states that if the Lammas bread is broken into four pieces and each piece placed in the four corners of the barn, then the garnered wheat will be protected all winter.  In many parts of England the Lammas loaf was more of a tithe than a token.  Many tenants, especially those who worked ecclesiastical or religious granges, were duty bound to produce a Lammas loaf from their wheat to be presented to their landlords on the first day of August.  So it grew up that the beginning of August was traditionally the time when those who were deeply connected and whose lives were shaped by the land around them brought the first fruits of the wheat harvest to church in order to give thanks for the bounty they had been given by God and to pray for the continuing good harvest of the land.  And today we in turn, who live and work in this beautiful part of Oxfordshire which produces wheat and other crops, bring our Lammas loaf as an offering of thanksgiving to God for the gift of creation and pray for our farmers who tend the land and make it bountiful.

In the Anglo Saxon Chronicle, which charts the history of the early medieval period in England, Lammas is regularly referred to as the feast of the first fruits so connecting what the Anglo Saxon Christians were doing in their fields with the more ancient tradition of thanksgiving for the first fruits as set out by God in our first reading.  In the book of Leviticus we find what appears to be a whole list of rules and regulations that the Lord gives to Moses which the people of Israel are bidden to fulfil as their side of the covenant with God.  The list is pretty comprehensive, running to 27 chapters, the whole book of Leviticus in fact, and covers such wide ranging topics as the slaughter of animals, sexual relationships, in addition to the rituals surrounding harvest and the produce of the land.  The commandment surrounding the first fruits can be seen as a spiritual tithe from the Lord who would ensure the people’s preservation and flourishing.  Perhaps, but these detailed commandments seem more than just a set of contractual obligations.  They shape and structure the ordinary everyday life of this pastoral world in the Near East into a ritual which reminds the people of their reliance and dependence on the Lord.  They receive from the Lord his goodness and the riches of creation, and in turn offer back the work of their hands in a ritual of praise and thanksgiving.  So, the feast of the first fruits from the ancient world through to the Lammas festival of the Anglo Saxons to modern times, is not only an act of thanksgiving for the bounty we have been given but also recognition of our dependence on God for everything, including our daily bread.

This sense of dependence is beautifully portrayed in our Gospel reading, the feeding of the four thousand in Matthew’s Gospel.  It is a situation which I am sure that many of us can imagine ourselves into.  If you are a summer festival goer, which I have to say I am not, but if you have been to any large event over the last few years or seen one on the TV, it does not take much imagination to transfer ourselves to that large group of folk who gathered to hear the words of this exciting and charismatic young rabbi from Nazareth.  They had followed him for three days, quite a festival, and so food had naturally run short.  Out of compassion for their simple, physical needs, Jesus performs this miracle of ensuring that seven loaves and a few fish are sufficient to fill them all, four thousand in total.  It seems so over generous, considering how much was wasted.  An excessive act of giving with no strings attached.  There is no covenant here, no contract into which the people must enter, simply an act of supplying the needs of all.  An act of kindness, generosity and compassion which, I am sure that if we were present we would never forget.

But in many ways, we are present to this very act of giving by our Lord.  Later in this service we will hold up a small loaf of bread, just like the one that the disciples gave to Jesus.  As he blessed that loaf so we will bless ours, offering it to the Lord in a ritual of thanksgiving and recognition of dependence.  Our loaf may not, however, feed four thousand, but it will become something even more special and miraculous.  For to us this loaf will become the body of Christ who does not only give us our daily bread but also gives us his very life and body that he may become part of our very selves and we imbibed with his divine nature.  We are fed like those four thousand people but the food we are given is the spiritual and physical food of Christ himself which will satisfy our deepest hunger and thirst.

Today we receive once again the generous, compassionate gift of Christ himself through our offering of the Lammas loaf.  He enters into us and we are reminded of our dependence on him not only for our daily bread and all the riches of the harvest of the land but also for our spiritual well-being.  In turn we are invited to ritually become like the Lammas loaf and offer ourselves to as a living sacrifice.  As Christians we are the body of Christ, who live through faith and dependence on him and in whom his Spirit resides and moves.  But I was wondering, what are our own personal first fruits?  What can we offer up to our Lord today to be blessed and made a further vehicle for his grace?  To answer that question we need first to consider what fruitfulness may look like.  To the farmers it is an easy question to answer: fruitfulness is a plentiful harvest and a good market price but for us the question is harder to answer.  What are the fruits of our labour and our lives?  To help us let us turn to the Roman Catholic priest Henri Nouwen who wrote these words that have lived with me for a while now:

There is a great difference between successfulness and fruitfulness.  Success comes from strength, control, and respectability.  A successful person has the energy to create something, to keep control over its development, and to make it in large quantities.  Success brings many rewards and often fame.  Fruits, however, come from weakness and vulnerability.  And fruits are unique.  A child is the fruit conceived in vulnerability, community is the fruit born through shared brokenness, and intimacy is the fruit that grows through touching another’s wounds.  Let’s remind one another that what brings us joy is not successfulness but fruitfulness.  (Bread for the journey by Henri Nouwen)

So let us seek to be fruitful, rather than successful, that we in turn may offer ourselves and our life together as our Lammas loaf this August, recognizing our dependence on the Lord for all the bounties of creation and giving thanks for our living bread, Christ himself, who generously and compassionately gives us all we can desire and satisfies our every need.  Amen.