In the name of the Father and of the Son and of the Holy Spirit.  Amen.

On Friday Jonathan and I had a rare treat.  We jumped on the train and had a trip up to London.  Ever since I had seen an advert in the newspaper for an exhibition that the Victoria and Albert museum were holding on medieval embroidery I had wanted to go.  Not so very inspiring for some, but me a medievalist, who knew how precious and rare and simply astounding the opus Anglicarum school of thirteenth century of embroidery was, this was an exhibition of a life time and not to be missed.  So Jonathan had booked the tickets which forced us to go and we went.  I was not disappointed.  For anyone who knows about embroidery, the opus Anglicarium or work of the English, became known and valued across the medieval world and was sought out by popes, kings and bishops alike as the very finest embroidery of the time.  Very little remains, much having decayed, destroyed during the Reformation or even buried with their owners, but the little that still remains gives us a breath taking insight into the sheer colour, exuberance and adornment of the medieval church.

The exhibition was mainly made up of liturgical vestments or robes, from chasubles, (which I am wearing) to dalmatics, copes (large cloaks that you will see in the cathedral canons wearing) to archbishop’s shoes and stockings, there was even a surcoat which we only see in pictures and brasses.  The exhibition was, of course, filled with ladies of the older generation who knew a thing or two about how to sew.  One of them kindly explained to us what split stitching was when we wondered aloud.  It seems to be a technique that splits the thread in two when you bring the needle up forming a very fine stitch on the cloth.  It was used extensively by the opus Anglicarium school to such effect that it gave the appearance of a painting rather than an embroidery.

Jonathan and I knew nothing about sewing, I had dabbled a bit in my childhood but nothing else.  My grandmother knew more and we still bring out her embroidered table cloth at Easter Sunday to adorn our lunchtime table.  For us two priests it was of course the liturgical robes that drew our eyes and for me, especially the copes.  In my undergraduate degree of English and medieval arts I had, of course, studied the Syon cope of the late fourteenth-century which is held by the V&A and so already knew that the opus Anglicarium school was worth a whole exhibition.  But I had seen little else.  What struck me as I moved from one exhibit to the next was not just the quality of work but the images and patterns and intricate details that they were filled with.  Today our vestments are mainly plain blocks of colour with maybe a few colourful panels down the middle.  But then the whole cope was covered with the stories of the life of Jesus and the rest of the Bible, apostles, saints, angels, animals and birds all contained within frames of foliage or geometric stars.  To have seen such a raiment of images come to life as the priest processed in the candlelit light of the church must have been encaptivating.  For without their own Bibles to read at home it was through the church, in both word and image, that the story of salvation was told. 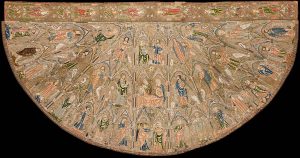 Alongside such realistic images there was also a plethora of symbolism that is largely lost to us today.  In our sophisticated world of fast moving images it is easy sometimes to look back on past ages as less sophisticated, simple even, but that is not always so.  One cope I spent a long time examining was the Toledo cope.  It is beautiful and full of images of the apostles and other saints, as well as the standard iconography connected with Mary and Jesus.  But it was also covered with images of birds.  I had seen birds on other pieces of work throughout the exhibition but often they had just appeared to be a repetitive motif, like foliage, that filled in spaces or divided the material into equal parts, this time I could begin to identify their species and they seemed to be connected with different saints.  St Peter had, what looked like, a magpie, St Thomas a woodpecker, St Andrew, a peacock.  Mary, of course had a dove and the Passion a chaffinch, both of which I understood but why St Paul had a sparrow and James the Great was bordered by an owl I found harder to understand.  I think more research into bird iconography is needed.  But that was not the only reason this cope made me think.  To the medieval audience the significance of each of these birds would not have been lost or needed to be looked up by them.  The desi

gn did more than just present a jolly exercise of spotting the birdie, however fun and engaging that may been for the bored medieval toddler or teenager, it had another message, a more subliminal one that would have been realised once the cope was worn during a service.  As the priest moved whilst he sang the office in service to God so too would this cope and the birds that adorned it would have come to life in the movement of the fabric and in their own way sang their own service to God.  As they came to life, so too in the imagination would the apostles and saints, those of the Bible, of long ago and of yester year, all combining along with this priest and also with them in their worship of God.  Each of us, like a bird, has a special song, unique to us.  It may take a while for us to find our voices, or even to believe we can sing, but that is all part of the journey of faith.  There is a song inside each one of us, I wonder, what is your song? 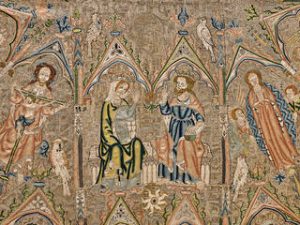 In this Week of Prayer for Christian Unity I find the image of each one of us as birds called to sing our own song to God a very helpful one.  We have turned the corner of the year and even in the bitter cold begin now to look for the first signs of spring.  I love that time when dawn comes a little earlier and the birds come out of their deathlike life of existence to sing once again.  The dawn chorus, as we all call it, is indeed a chorus of song, from the first couple of notes to the cacophony of birdsong that fills the brightening skies.  In a way each one of us has a different voice to contribute to the song of life, just by being who we are, but what joy it is to us to join our song with each other’s and together create our dawn chorus of praise to Christ the rising Son.  This week of prayer for Christian Unity must first and foremost be a time of joyous thanksgiving that we are each called to sing our own song, our own part which contributes to the symphony of love and praise.

But as we all know this week is also a time when we hold before God our own inability to often sing in harmony and the cacophony of noise that we can often create instead of enjoying each other’s song and joining it with our own.  There is a story told on that delightful of programmes, Bagpuss, that reminds us and humbles us and silences us to listen once again to our own and each other’s song.  It is the tale of the Athenian Owls.  Emily brings to Bagpuss a dirty old piece of cloth and as the mice scrub away at it to clean it up, Madeleine the rag doll calls them to stop their rough handling of the fabric but to be gentle.  Gradually the image of an owl appears and the words atho underneath. 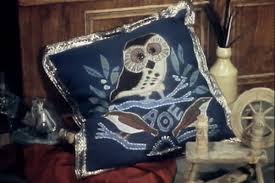 The next night a group of plain brown bird arrived in the woods.  When it came to the time for the owls to sing they noticed that none of the animals had come to hear them sing, where had they all gone?  They listened and heard the most beautiful song they had ever heard, it was the song of the nightingale and they realised that the animals would never come to hear them sing again.  The owls grew angry and they wondered who could have played such a trick on them, “who who who?” they said.  They saw the moon come bye and suddenly realised “You you you”, “That is the sort of song owls should sing,” said the moon and that has been their song ever since.

Let us not diminish our song but give thanks once again that we are called to join the harmony of the saints and raise our voices to answer our call and sing.  Amen.