This week I received a remarkable report from a group of people I hadn’t realised had visited the churchyard in Cuddesdon. Donald Rice is a member of group of lichenologists who have been researching into lichens in south-east Oxfordshire churchyards. As his results regarding Cuddesdon were very impressive, he thought we might like to hear about them. So here is part of his report, the rest can be found on the board in All Saints’.

The churchyards of South-East Oxfordshire have received little attention form lichenologists in the past. Our recent surveys have revealed lichen communities of considerable interest and conservation importance.

What are lichens? Lichens are curious dual organisms, a close association between a fungus and a photosynthetic partner (usually a green algae). This association is so intimate that Victorian biologists argued about whether lichens were a single organism or a partnership. One school of thought maintained that the microscopic green cells within them were organelles produced by the fungus while others argued that the green cells were algae that had been entrapped by the fungus. We now know that the latter is correct but the degree to which the algae are exploited is still a matter of debate.

Why are churchyards important? Churchyards are hotspots for lichen biodiversity. In out lowland agricultural landscape they are important in providing a wide range of rock types and the church building usually provides stonework of considerable antiquity.

What have we found so far? Perhaps the most exciting discovery is that of Verrucaria obfuscans which is new to Britain. After it was discovered at Great Milton in February 2015 it has been found in churchyards across Eastern England. This lichen was not previously recognised by British lichenologists. A combination of particularly good material at Great Milton and the recent publication of a review of this group of lichens by a Polish author led to this advance in the understanding of British lichens.

Between February and July 2015 twelve churchyards in East Oxfordshire were surveyed resulting in 1013 records (an average of 84.4 taxa per site). The surveys have each typically taken two or three hours which is sufficient to record the majority of species but not to find all of the inconspicuous lichens present. The intention is to carry out a two phase survey with the most interesting yards revisited. The churchyard with the longest list so far is Great Milton (111) followed by Stoke Talmage (106), Cuddesdon (100), Waterstock (98), Marsh Baldon (95), Toot Balden (88), Great Haseley (79), Cuxham (73), Waterperry (72), Holton (69), Wheatfield (72) and Wheatley (54). The total number of taxa recorded during the project is currently 198. 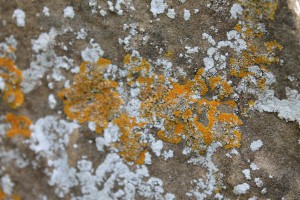 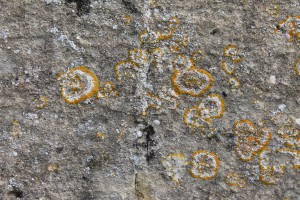 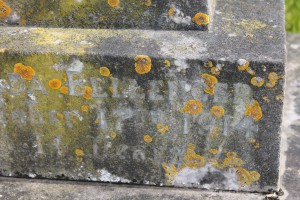 With Cuddesdon containing the third largest count of species, the team are hoping to return to our churchyard to continue their research. Further information about churchyard lichens can be found on the British Lichen Society website: http://www.britishlichensociety.org.uk/ while details of the Oxfordshire survey can be obtained from markpowell222@btinternet.com.