It is not unknown, when telling someone that you are preaching on Trinity Sunday to be greeted with the words, ‘Oh dear, the hardest day of the year to preach on.’  When we come to talk about, let alone understand, the Trinity it is often the case that ‘words strain, Crack and sometimes break under the burden, Under the tension, slip, slide and perish / Decay with imprecision, will not stay in place’  as T.S. Eliot put it.  That is not to say that countless attempts have not been made to try and explain the belief in ‘One in Three and Three in One’ but in each case the analogy fails in its ability to rationalize the ineffable.  Here are a few you may be familiar with: the Trinity can be likened to water which can take three forms: water, vapour and air yet is still one substance.  Of course, this is true but unlike God the Trinity the same drop of water cannot simultaneously be water, vapour and air, which God the Father and God the Son and God the Holy Spirit are.  Another image which is often used is that of an actor.  Unlike the water analogy, this idea preserves the notion that God is one Being but fails to present God as three different persons, but just one person playing three different roles.  Similarly, the human analogy that we are body, mind and spirit, yet one ‘being’ also fails, because it is again about one person in three different roles; an additional difficulty is that at death the body and mind are separated from the spirit – whereas the Trinity is inseparable and co-eternal.  Perhaps a better analogy is that of a triangle.  The three corners of the triangle are linked to each other by the three sides (1+1+1=3) yet make up the one figure (1x1x1=1).  To a mathematician the beauty of maths has at last expressed the inexpressible but to a theologian the three persons of the Trinity are not the same, even with my inability in maths (1x2x3) does not equal 1.  From just dipping our toe into the immensity of the ocean of doctrine it is clear to see that not only words but thoughts and concepts crack and strain in their attempt to rationalize or verbalize the doctrine of the Trinity.

It is not surprising therefore that from earliest times Christians have sought to express their belief in the Trinity through images instead of words.  This carving was taken from an inscription found in the catacombs in Rome.  Fearing for their lives the early Christians used secret symbols and images to declare their faith which would not be understood by their Roman persecutors.  This looks just like an anchor which in itself speaks of the God who is anchor and rock when the tempest is high and stills the raging storms, yet it also visualises the doctrine of the Trinity.  At the top is the eternal Father who has no beginning and no end.  He surmounts a cross, the symbol of Christ and means of our salvation.  At the bottom the cross springs into a dove, the symbol of the Holy Spirit.  So we see in one image the three persons of the Trinity: Father, Son and Holy Spirit, the anchor for all embarked on this journey of life however smooth or rocky it might be. 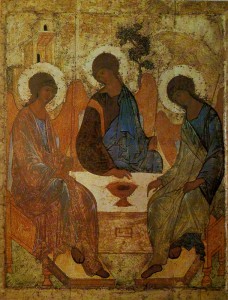 An image of the Trinity which has become increasingly popular in recent years is that of Rublev’s icon of the same name.  It depicts the story of the three young men who came to visit Abraham at the oaks of Mamre.  They are seated round a table on which stands a cup.  The angel to the left wears robes of shimmering, ethereal blue.  He is God the Father and his gaze is turned to the two other figures, which represent God the Son and God the Holy Spirit.  The Son is distinguished by his robes of blue and brown, symbols of his divinity and humanity.  He returns the Father’s gaze and his hand is raised in blessing over the cup.  The final figure, the Holy Spirit, similarly wears a robe of divine blue but his cloak is of green, the colour which in iconography represents renewal.  He looks to the Father so encapsulating the Eastern doctrine of the Spirit proceeding from the Father.  So we see in this icon the three persons of the Trinity, unique in their being and action yet united through their essence which is revealed in their gaze of love.  But his icon seeks to be more than just a symbolic representation of the Trinity.  Like all icons, it does not so much wish to express or explain but rather to be a window or signpost to the mystery of what it seeks to show.  We are invited not to simply look at Rublev’s icon and rationalize or even verbalize what we see but rather to participate in its meaning.  The composition of the icon encourages us to literally enter into it for the three figures form a circle with geometric lines which stretch out of the picture and coincide at a point where we are located.  As if to guide us the Son’s hand is at the centre of the circle whilst the Spirit points down to the intersecting point where we are invited to enter into the composition.  Rublev’s icon has taken us beyond images and words which seek to explain the Trinity and invited us into the space not just of encounter but also of participation.

It seems to me that is was our forefathers the Celtic Christians who best understood the implications of the revelation of the triune God and how profoundly our understanding of our relationship with God is changed when we comprehend it in terms of existing within the triune nature of God himself.  For them the Creator father sprung under their feet every day, the saving Christ was their shield and anchor whilst the breath of the Holy Spirit was in their mouths.  To live out our belief in the Trinity is to alter how we understand our God and more importantly how we relate to him.  No longer is the relationship simply defined in terms of I and You as it was with the people of Israel. Through the Incarnation of the Son and grace of the Spirit we have been gathered up into the being of God so that it is within him that we live and move and have our being.  The Trinity is not so much about a doctrine which we are to try to analyse or comprehend but is rather an invitation to become part of the gaze of the community of love through the love of the Son and in the Spirit’s presence.

I would like to end with this prayer by St Ethelwold which was used at baptism, the moment when we respond to the call to enter into the community of love,

In the presence of the Father I immerse thee

That to thee he may protecting be

Watching over thy head

In the presence of the Creator I immerse thee.

In the presence of the Son I immerse thee

That to thee He may a Saviour be

May He keep thee whole and well

Save thee from the jaws of hell

In the presence of the Redeemer I immerse thee.

In the presence of the Spirit I immerse thee

That he may a mighty strengthener be

May He guide thee, lead, empower

Give thee hope in the darkest hour

In the Spirit the life-giver I immerse thee.

In the Holy and blessed Three, I immerse thee

Into their love and joy I place thee

Into their peace and power I steep thee

Into the hands that will keep thee

Into the Trinity of love I immerse thee.  Amen