A hatchment that has hung neglected in the ringing chamber of the tower of All Saints has recently been restored and now hangs resplendently in the nave over the north door, a particularly appropriate position because this was the door through which Bishops of Oxford, resident in the Palace just to the north of the church from the seventeenth century through to the 1970s, would have entered All Saints. You cannot help but see the hatchment ahead of you as you come into the church from the south porch.

Hatchments are huge diamond-shaped paintings of coats of arms (this one is nearly seven feet high when hung) and it was the custom for them to be produced on the death of someone entitled to a coat of arms. They date from the end of the seventeenth century and it is not at all certain how hatchments (the word is a corruption of ‘achievement’) were used. Some heraldry experts think they were carried in procession during a funeral and then hung in the church until the tomb of the deceased had been constructed. But, by the time our hatchment was painted in 1827, it would have simply hung on the outside of the house of the deceased, above the front door, during the mourning period and would then be deposited in the local church.

The Hon. and Rt. Rev. Edward Legge became Bishop of Oxford in 1816 and Warden of All Souls College, Oxford a year later and occupied both these posts until his death in 1827. He was the seventh son of the Earl of Dartmouth and therefore entitled in his own right to a coat of arms. When he died two identical hatchments were painted, one to hang outside the Warden’s Lodgings of All Souls in The High in Oxford and the other to hang outside the Bishop’s Palace in Cuddesdon.

Our hatchment first came to notice as a result of the visit to the church in 2001 of Mr John Hawkins, a specialist in heraldry, who came to see the heraldic windows of the bishops in the chancel. John Paxton, as churchwarden, also showed him the hatchment, then in poor condition, torn in two places, on a sagging canvas and covered with the dust and bird droppings of nearly 200 years of neglect. Nevertheless, John Hawkins subsequently wrote a very interesting interpretation of the picture which concludes with the statement: ‘Cuddesdon Church has a very interesting and unusual hatchment by any standards, the more so as it is one of a pair produced for the same person.’

We can interpret this painting by noticing first how the central shield is split into three parts, each with a different coat of arms. On 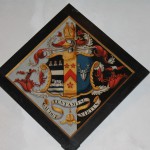 the right is the Legge family arms, a silver stag’s head on a blue background; in the centre is the arms of All Souls College, three rosettes and a chevron on a gilded background; and on the left is the arms of the see of Oxford, with the ox crossing a ford below and three female saints above, on a dark blue background. The heraldic shield of a bishop is normally shown with a mitre over it but here we have the very unusual arrangement of a nobleman’s helmet over the shield with a bishop’s mitre over that. Below the shield is a swirling ribbon bearing the Legge family motto: gaudet tentamine virtus (virtue exults in the trial). Finally, notice how the background is painted so that Edward Legge’s arms are on a black background, because it is he who has died, but the arms of the college and the diocese are on a white background.

Our hatchment has been very beautifully restored and for that we must thank Richard Knight, who used to live next to the church in Wall House. An expert in art history and in charge of Old Masters for Christie’s, he steered the restoration process, arranging for the painting to be taken from its frame in the tower and carefully wrapped around a cardboard cylinder by the specialist who then re-backed the canvas prior to restoration of the oil paintwork and of the frame. Thanks too to Joe Gleed and Paul Sellar, who together managed the difficult task of hanging the hatchment; also to John Paxton for a very generous donation and to All Souls College, who also kindly contributed to the cost of restoration. The PCC has underwritten the remaining cost but if you would care to make a donation and be mentioned in the permanent information notice that will go on the wall below the hatchment, please contact me or any other member of the PCC.